In a stroke of genius the first round of the 2019-2020 Grand Prix series was the Mob Match against Orpington Road Runners on November 24th. Not so clever was that the Orpies, perhaps deliberately, timetabled it for the morning after our Xmas Party! PWRs though are a hardy and loyal bunch and, despite the excesses of the night before, we turned out in our droves and inflicted another defeat on our local rivals.

An incredible 130 PWRs turned up at High Elms on the Sunday morning to Orpington’s paltry 55 and we trounced them! They may have taken the first 5 places but we have strength in depth! Of the PWR field, 86 were entered for the GP. For the purposes of this report I am obviously using runners’ groupings as originally announced but there may have to be some changes following scrutiny of the opening two rounds by the GP committee. Round 2 may reveal more than this opener as results were definitely influenced in some cases by the demands of the night before and where you started the race as the entry into the woods is a very severe pinch point.

Group 1 (6 runners)
Last season’s GP runner-up Simon Dahdi (25:50) led the Group 1s home and was the first PWR over the line in 6th overall. As the champion of Group 2 Adam Wilkinson (26:16), like all the other champions, has been promoted but looks like he will not be struggling as he finished 2nd. Guinness World Record holder Kev Howarth (26:35) was 3rd from David Adams, Stephen Pond and Matthew Pond - last season’s 3rd placed, champion and 4th placed respectively.

Group 2 (3 runners)
Seasoned campaigner Johnny Gill (26:37) took the Group 2 victory from Andy Tippet (27:01) who was runner-up in last season’s championship. Dave Groom (27:31) is gradually returning to form and took 3rd with Nathan Webster not far behind in 4th.

Group 3 (12 runners)
An excellent turnout in this group of 12 runners and many of them had been in the thick of action at the party the night before. One that hadn’t took the win with Sarah Birch (28:07) also the first lady overall and the recipient of a bottle of wine for her efforts. Ralph Ambrose (29:36) was just 6s ahead of 3rd-placed Paul Kelly (29:42), with Charles Yates, Stephen Robson and Paul Whelan completing the top six.

Group 4 (10 runners)
Ten in this group with Carl Inman (29:58) leading them home. Lucy Drury (30:29), who took the final podium place in this group last season, was next up with Jeremy Benson (31:00) 3rd. Paul Strachan was 4th from Alice Neal and last season’s Group 5 champion Chloe Weaver.

Group 6 (6 runners)
Andrew Deer (32:55) produced a fine performance to win Group 6 despite being on photographic duties the night before. He was well clear of Laura Stables (35:48) in 2nd. Cliff Lyons (36:24) was 3rd, just one place ahead on the course of Janine Harris. Amelia Isaacs and Sigrid Robson completed the runners in this group.

Group 8 (8 runners)
Chris Summers (39:10) who had announced the night before that his preferred charity, the Alzheimer’s Society, would be the PWR choice for this season took the win. He headed home Linsey Hopkins (39:10), Elizabeth Manley, Michael Boyd, Eadaoin Miller and Jo Gambell.

Group 9 (10 runners)
It couldn’t have been any closer at the top in this group with Paul Pester, 3rd in last season’s champs, and Susan Clark being given the same time (40:39)! Pester must have been ahead as they crossed the finish line. The next three finishers in this group – Carly Hibberd (40:58), Janice Mitchell and Sally Callaghan were also close and within 30s of the lead two! Lucinda Stocks was the best of the rest in 6th.

The next round is in fact two events with competitors’ best time from the parkruns at Bethlem Royal Hospital on December 7th and 14th to count. Judging by the turnout of PWRs at this relatively new parkrun on November 30th there should be a bumper entry. Don’t miss out! 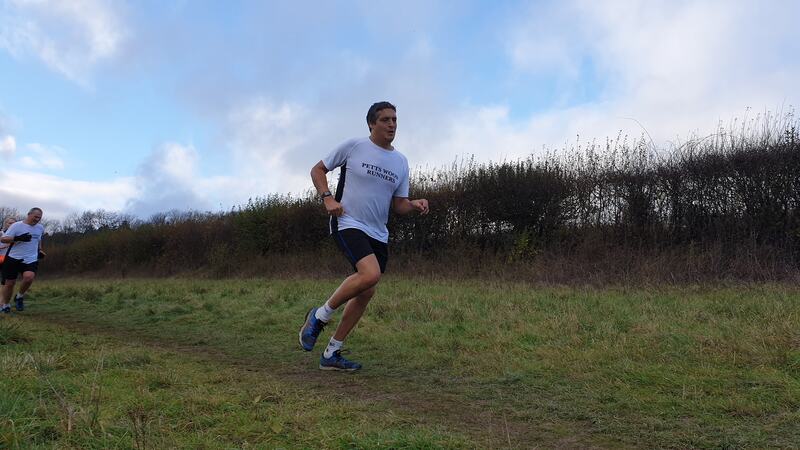 Round 2 of this season’s Grand Prix series consisted of two parkruns on consecutive weekends with a competitor’s best time used to decide their finishing position. Bethlem Hospital’s grounds was the venue and a number of PWRs had taken the opportunity to try the course a week earlier. On that occasion they were treated to Dame Kelly Holmes, slippery conditions and mist which meant you couldn’t actually see much of the route.

Unfortunately, there was no Dame Kelly at the two GP events and the course had got even more slippery! In fact, in the majority of cases, runners did better at the first try on December 7th as conditions had deteriorated even further by the 14th. Something to bear in mind when it comes to Round 12 which is again a double-header parkrun – make sure you do both unless you can predict the weather accurately!

The GP committee were keeping an eagle-eye on performances at the Mob Match opener and these parkruns and did not hesitate to change competitors’ groups if anyone was considered to be more appropriate for a different group. There shouldn’t be any more changes, so you now know your key rivals for the rest of the season!

An amazing 112 PWRs took part in one or both of the events with just 12 not registered for the Grand Prix. 13 also volunteered at one of the events and are rewarded with 15 ‘volunteer’ points which can be used at the end of the season towards their overall points tally if they don’t race in at least 8 of the 12 rounds.

Group 1 (9 runners)
An excellent 9 runners in the premier group with 7 entering the first event, 4 the second, 2 (Adam Wilkinson and Matthew Pond) doing both and 2 running at one and volunteering at the other (Kev Howarth and Stephen Pond).

Howarth (36 points) leads the championship by one point from last year’s runner-up Dahdi (35) who in turn is only one point ahead of Wilkinson (34). Tippet (32) and Adams (29) are next up from Pond Junior & Senior tied on 23 points apiece.

It’s obviously very early days in the championship but the signs are encouraging for a battle royale as we have a three-way tie for 1st place! Groom (two 2nd places), Gill (a win then a 2nd place) and Webster (runner-up and then a victory) all have 36 points. Everyone else has only contested one round so far and are headed by Rodriguez Drumond and John Gurney tied on 15 points apiece, and Falshaw (14).

Group 3 (12 runners)
This group again mustered 12 runners for this round. Beaten down to 3rd in last season’s championship right at the finish, James Wall (21:50) showed he is again going to be in the mix this year and set the fastest time by 13s. Ralph Ambrose (22:03) was 2nd for the second round in a row and will have local knowledge on his side at the series finale as he is the Hoblingwell race director and has raced at almost two thirds of the events held there! Peter Fisher (22:11), the Group 3 runner-up last year, was 3rd from Mob Match winner Sarah Birch (22:21) who only raced on the 14th. Stuart Isaacs (22:52) and Kevin Cooper (22:55) completed the top half dozen.
Ambrose (36 points) has a slender 1-point lead over Birch (35) in the title race with Paul Kelly (28) in 3rd despite only being 7th at Bethlem. Cooper (24) is 4th, one point clear of a three-way tie for 5th between Charles Yates, Paul Whelan and Isaacs.

The top two at Bethlem share the Group 4 lead with 36 points apiece – Welfare having a 3rd and a win to his name and Drury two 2nds to hers. Inman (35) drops to 3rd but is only one point behind the top two while Benson (31) is 4th and has banked 15 volunteer points in case they are needed at the end of the series. Behind him on 25 points is a tie between Ben Clarkson, Mitchell and Paul Strachan.

Larner (two 2nd places) and Allison (a 3rd place and a win) top the group with 36 points from Launchbury (two 5ths) on 28. Julie Travers (27) is 4th from Dominic Russell (26) and Mob Match winner and last year’s Group 8 champion Olivia Senbanjo (20).

Clark (38) takes over the championship lead with Pester (36) dropping to 2nd overall. Hibberd (34) is 3rd and has some volunteering points available if required. Mitchell (29) is 4th, with Carey and Lucinda Stocks tied for 5th place on 25 points apiece.

Group 10 (9 runners)
Sherry Ursell (33:23) was ‘only’ 5th at the Mob Match (too much energy expended on the dance floor the previous night?) but produced the goods at Bethlem to take the Group 10 win. Liz Squires (33:35) and Sue McAdam (34:32) were the runner-up and victor respectively at the Mob Match but Squires got the better of McAdam on this occasion to take 2nd place. In fact, it was the same names in the top six this time out, just in a different order, with Barbara Carr (35:11) 4th from Simon Gleeson (35:57) and Alexandra Robins (36:45).

Round 3 is the popular Canterbury 10 miler at 10am on Sunday January 26th. Entries close on the 23rd if you’re prepared to leave it that late. Full details at http://canterbury10.co.uk/.

A PWR coach (of the wheeled variety) has been laid on but at the time of writing all the places had been taken. To find out how to be put on the waiting list go to https://docs.google.com/forms/d/e/1FAIpQLSfq5oSUS2do8JHsSfK1ppLsvbm5ftfvn6A1KATbGR4oau5MVw/closedform

Round 3 saw both the distance raced and the distance travelled well up from the previous local rounds. The Canterbury 10 miler though was well supported with an excellent 103 PWRs of which 29 were not eligible for Grand Prix points.

Group 2 (6 runners)
After not quite getting to grips with Bethlem’s Round 2 mud despite two tries, Mob Match winner Johnny Gill (64:40) was back on top of Group 2 at Canterbury as he had been last year too. Gill was comfortably clear of 2nd-placed Nathan Webster (67:13), with Hector Drumond (68:26) next up. After two 2nd places at the first two rounds David Groom (69:01) was 4th from Jamie Fernandes (71:09) and Mike Reeves (76:49) making his first appearance in this year’s series.

None of the top 4 coming into this round raced at Canterbury and as a result have fallen out of the leading places. Robson (41 points) now heads the table from Yates (39) and Wall and Whelan tied in 3rd on 38 points apiece. Ralph Ambrose (36) and Sarah Birch (35) who were the top two coming into this round drop to 5th and 6th respectively.

Joint series leader coming into this round David Welfare did not race and drops to 5th overall in the series. Inman (55 points) sneaks ahead of Drury (54) by one point to take over at the top, with Benson (46) up one place to 3rd. Strachan (38) moves up to 4th from Welfare (36) and Mitchell (35).

Futter’s victory catapults here from 5th into the series lead with 48 points. Hewson (46) moves up from 3rd to 2nd while Dunstan drops from 1st to joint 3rd with Tanna, both on 33 points. Den Baes (31) and Kevin Castle (29) complete the top six.

Deer (51 points) retains his championship lead with Lugar (48) moving up one place to the runner-up spot. Harris (44) moves one place in the opposite direction to 3rd overall, from double victor Finch (40), Robson (36) and Sutton (35).

Allison (52 points), with two 3rd places and a win, retains his championship lead while non-attendee Anna Larner (36) drops to 4th behind Launchbury (42) and Russell (41). Lugar (31) and Julie Travers (27) complete the top six in the table.

The championship top two, Chris Summers and Elizabeth Manley, did not contest this round and so it is Stocks (45) who takes over the helm from Boyd (42). Summers (38) and Manley (36) drop to 3rd and 4th respectively while Romano (32) moves up to 5th with Broadway (31) 6th.

As championship leader Liz Squires and the two previous round winners, Sue McAdam and Sherry Ursell, were not present, it is all change in the championship table with Gleeson’s win putting him on top on 49 points. Robins (47) is now 2nd from Carr (43), McAdam and Squires share 4th with 36 points, and Ursell (34) is 6th.

Next up is the 11th running of the Tenterden 5 miler around the country lanes of the pretty Kent village of Wittersham. Further details at https://www.nice-work.org.uk/races/Tenterden-5. The current course records are Male 25:01 (Ross Skelton 2018) and Female 28:13 (Ashley Gibson 2015).